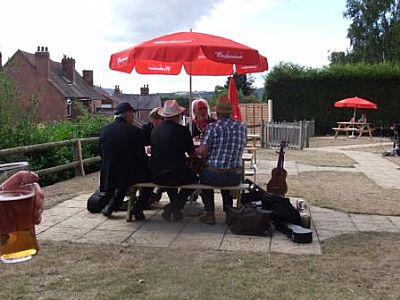 SUSA started life when the Kidderminster Shuttle of 11th March 2004 carried the news that Ray Shakeshaft was starting a ukulele club at the Christian Community (St. George's) Hall, Bewdley. Ray, a retired lecturer, had played the banjo on the folk music circuit and was also accomplished on keyboard, acoustic and lapsteel guitars, saxophone and drums but had only taken up the ukulele in 2003.

Perhaps it was his passion for music that intuitively led him to believe that this "jolliest of instruments" would soon be enjoying a wave of popularity worldwide in America, Europe, Japan and New Zealand. And so the SEVERNSIDE UKULELE STRUMMERS ASSOCIATION - SUSA - was formed and Ray was very proud that it was one of the earliest, if not the first, 'wooden figure eight' uke club in the UK.

From an initial 5 members the club grew quickly and in December 2004 made it's first public appearance with it's performing band 'The SUSAphonics', and has entertained for many social organisations since then.

In 2007, SUSA moved to it's present home in Kidderminster.

Ray had many contacts with players, not only in the U.K. but also America and Europe and he relished the opportunities to organise annual uke camping weekends in Suffolk, a Club Annual Ukulele Day and, since 2007, a Ukulele's Birthday lunch-time get together at a local hostelry, celebrating the introduction, in the 1880's, of the ukulele to the Hawaiian Islands by Portuguse immigrants.

Sadly Ray suffered a stroke in 2011 and was unable to continue leading SUSA. Get well messages from his many friends, home and abroad, were posted at Ukulele Cosmos: http://www.ukulelecosmos.com/phpBB3/viewtopic.php?f=2&t=24214

Then on October 10th 2015, Ray passed away.  Many friends came to his funeral, some travelling miles and as his coffin made its last journey through the curtain the massed ukulele players sang "I'll See You In My Dreams" which was a song SUSA always finished their performances with.  Later we all gathered at the Stone Manner and sang many of the songs Ray had liked.  SUSA wore red and the Samba Band wore yellow, a request from Nicky and Martin.  One comment from a SUSA member was " I never knew the man but without him I would never had made all my friends at SUSA.  God rest him".  I think we all felt the same way.